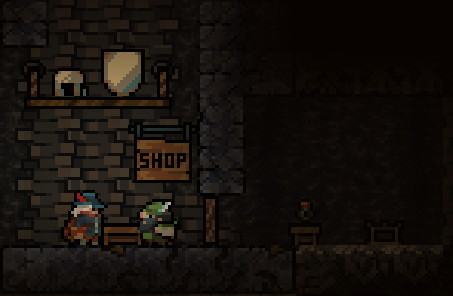 Shops are special rooms which can appear in any level of the game, save for side areas. There is never more than a single shop in a level.

A shop always contains at least two items and is always operated by a Shopkeeper.

A shop contains some destructible cosmetic objects which serve no purpose: a sign, a decorative helmet and armor, a counter, and item stands.

As the player buys items from the shop, shops on later floors will contain extra items, up to five items total. These extra items will have better stats and a higher price. The amount of bought items required to upgrade the shop scales directly with the shops' current upgrade amount and NOT the total amount of gold spent. This means that if you want to upgrade a shop to 5 items, you should buy the cheapest items available to maximize efficiency.

Note that these items do not all have to be bought on the same level.

After angering a shopkeeper, all subsequent shopkeepers will immediately be hostile towards the player. These are the actions which will turn the shopkeeper hostile:

After upgrading the shop to 4 or 5 items it is advisable to attack the shopkeeper to save money. Generally, by the time you have a fully upgraded shop you should be able to fight the shopkeeper without any difficulties.

Should you, however, feel like you are not well-equipped enough, you can still easily dispose of the shopkeeper in most areas:

You can easily rob the shop in online multiplayer by letting your teammate(s) wait at the exit while you sneak into the shop and steal the items.

There are several items that allow you to rob the shop in single player. (blink spell/wand, digging wand, floor phasing boots, wall phasing gloves etc.) Make sure to clear out the entire stage before you rob the shop as the shopkeeper will start patrolling after he notices that some of his wares are missing. If you wait until after he leaves his backroom you will have enough time to steal the items and exit the stage.

Any items stolen from the shop will be labeled with a Stolen tag.

"There has to be something good in it!"

On some levels, a Shopkeeper's Stash is generated in the shop's backroom, along with a Friendly Thief. Interacting with the Thief will accept the quest, causing the NPC to disappear and reappear during the next bonfire intermission.

Using a Stash within the inventory opens it and reveals a god-cursed item with the Stolen tag. However, this newly revealed item cannot be given to the Fox Thief NPC.

Delivering the unopened Stash to the Thief rewards the player with a large amount of coins (up to multiple hundreds).